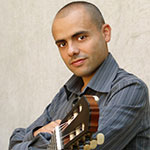 Born in Sardegna, Italy, Franco began to play the guitar at the age of ten. Six years later he made his debut for the Italian television station RAI, performing in a series of live broadcasts, which reached an audience in excess of eight million people. He went on to win top prizes in every national and international competition he entered, and received the particular honor of winning the Naxos Recording Prize at the 1997 Guitar Foundation of America International Competition. A graduate with high honors from the Conservatorio Statale di Musica G. P. da Palestrina in Italy, Franco also graduated from the Graduate Performance Diploma and the distinguished Artist Diploma programs at the Peabody Conservatory of Music in Baltimore, MD, where he studied under the guidance of Manuel Barrueco.

Guitarist Franco Platino, recognized for his expressive interpretation and effortless virtuosity, has won enthusiastic praise from international audiences and critics. Described by The American Record Guide as “an extremely expressive player, his virtuosity is apparent but never pushed,” as well as by Italy’s Seicorde Magazine for performances that are “absolutely on focus, unquestionably professional in the impeccable cascades of notes discharged with complete ease and clarity,” Mr. Platino has performed in recital and as guest soloist with orchestras across the United States from New York City’s Carnegie Hall to San Francisco’s Herbst Theater, as well as throughout Canada, Mexico, and Europe.

As a chamber musician, Franco has worked with a wide range of distinguished artists, most notably his mentor Manuel Barrueco. The two toured in duo throughout Europe, and their concerts were hailed in Spain as a “musical symbiosis” and in Luxembourg as sounding “like four hands on one imaginary gigantic guitar, they played as though they were one man.” Their concerts were broadcast on radio in Germany and in Italy, and in the US, they performed live on NPR’s “Performance Today.” The duo’s recording, Virtuoso Guitar Duos, is available on the Tonar label.

For more information, visit www.francoplatino.com. You can purchase Franco Platino’s CDs at any Levine campus.