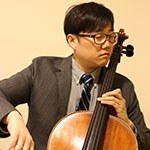 Jongbin says his favorite aspect of being on faculty at Levine is, “Having a chance to meet variety of students and also amazing other faculty members.”

“I trying opening students musical potentials and enthusiasm as well as working and solving technical issues. According their level, age and physicals, each student needs to be approached different. It is so thrilled to find a way to solve their physical and technical issues. When they overcome those issues, they have so much freedom and easiness of their playing.”