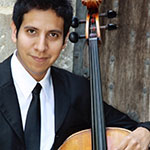 Alan has been a prize winner in several music competitions, including the Second Yokohama International Music Competition in Japan. He has appeared in recitals in Brazil, Japan, Mexico, Paraguay, Portugal, Spain, and the USA; including presentations at the Smithsonian museum, the Kennedy Center, and the White House. Alan has recently published a book based on his investigation of Latin American classical cello music, “The Influence of Carlos Prieto on Contemporary Cello Music” University Press of America. This book is currently for sale in all major bookstores around the world, and can be found at the libraries of many higher education institutions such as Yale, MIT, Duke, Columbia, Harvard, Maryland, Texas, and California universities, among many others.

Alan has presented masterclasses and directed summer music festivals in the U.S., Paraguay, Spain, and México. A strong advocate of Latin American music, Alan often premieres and includes music by new Latin American composers in his lectures and presentations. In 2015, Alan founded the Middleburg Concert Series, a series that promoted chamber music collaborations with outstanding national and international artists, and for which Alan served as artistic director and artist in residence until December 2018. Since September 2016, Alan is represented in Japan by Yoshiko Miyamoto.