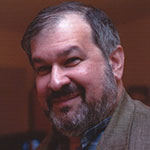 Carl took Doctoral studies at New York University and received both his B.M. in Education and M.M. in Theory from Temple University.

In addition to his experience singing in religious and community choruses, Carl has conducted and arranged music for synagogue choirs. He was recipient of a Fellowship with the National Endowment for the Arts.

Utilizing his vast knowledge of music education and history, Carl has worked in an administrative capacity for numerous community choruses, the American Chamber Orchestra, American Youth Philharmonic, D.C. Federation of Musicians, The Washington Chorus and Levine.

Carl has been on the Levine faculty since 1992 where he teaches theory  and music appreciation, and is supervisor of the NW DC (Upton Street) library.

“I find that most adults have more musical knowledge than they think they do, but have not learned how to organize it or apply it to the study of music they are interested in. Addressing that is a principal goal in my teaching.”

When Carl is not singing, teaching and helping out at the NW DC Music Library, he is collecting musical coins and currency as well as materials on Gilbert and Sullivan.