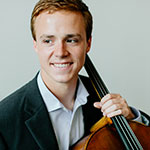 Henry completed his B.M. from the University of Cincinnati College-Conservatory of Music, where he studied cello with Alan Rafferty and his M.M. at the Cleveland Institute of Music, where he studied cello with Richard Weiss and Suzuki Pedagogy with Abbey Hansen. Other influential teachers include Stephen Geber, Avi Friedlander, and Jared Ballance. Additionally, Henry has performed in masterclasses for Hans Jorgen Jensen, Richard Aaron, Alisa Weilerstein, Johannes Moser, Merry Peckham, and Melissa Kraut.

Henry was a Cello Fellow at National Repertory Orchestra, National Orchestral Institute, and participated in the Kent/Blossom Music Festival.

At the Cleveland Institute of Music, Henry completed his long-term Suzuki training under the guidance of Abbey Hansen. He has registered Every Child Can and Suzuki Units 1-10 training with the Suzuki Association of the Americas. Currently on faculty at Levine Music in Washington D.C., Henry has previously taught at the Aurora School of Music, the Sato Center for Suzuki Studies, MyCincinnati, and Cincinnati Young Artists.

His favorite aspect of being on faculty at Levine is, “I am greatly appreciative of the fact that I am surrounded by faculty with world-class training and experience in both teaching and performing.”

“I believe that “talent” can be fostered and cultivated in every individual. “Talent” has the best chance to thrive if the student is placed in a proper learning environment and has an eagerness to learn. Additionally, I hold a vision for my students to become accomplished learners. I believe that learning an instrument teaches a student positive character attributes and critical thinking skills. Subsequently, these character attributes and critical thinking skills will aid the student down the road in whatever his/her future endeavors end up becoming. To quote Shinichi Suzuki, ‘Teaching music is not my main purpose. I want to make good citizens, noble human beings. If a child hears fine music from the day of his birth, and learns to play it himself, he develops sensitivity, discipline and endurance.'”

Outside of music, Henry’s hobbies include running, chess, meditation, and fantasy football.