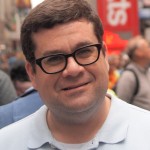 Keith has a B.M. in Musical Theatre from Catholic University and a M.S. in Finance and Accounting from the University of Maryland. He has also studied Orchestration for Film and TV at the Berkelee College of Music.

He has served as an accompanist for many cabaret singers and has toured with an Edie Beale impersonator with performances at Joe’s Pub in NYC, Feinstein’s in San Francisco, and the Barre in Los Angeles.

As an orchestrator and arranger working extensively with local composer Joan Cushing, Keith has orchestrated “The Christmas Doll” (published by Dramatic Publishing), “Heidi”, “Breast In Show”, and “Ella: A Jazz Age Cinderella”. Keith has also written over 100 jazz band and choral charts for high schools all over the country.

Keith joined the Levine faculty in 2013 as a music director with Levine’s musical theatre program.

“I love Levine’s dedication to all aspects of the musical arts from instrumental to choral to jazz to electronic. Plus my fellow faculty members are not only great teachers, but some of the best and most sought after performers in the Washington, D.C. area.”

“When working with young music theater performers I spend a good deal of time working on making the best sound as both an ensemble and soloist as opposed to just teaching the individual parts. We examine how to use the lyrics and the music together and how to connect the scene with the emotion of the lyrics, all while staying focused on the technical aspects of the voice.”

Keith’s favorite part of being on faculty with Levine is getting to work with the students.