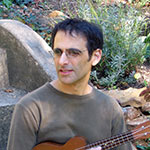 Mark attended Pennsylvania State University to receive a B.A. in General Arts and Sciences. He then went on to study at University of Maryland and graduated with a M.A. in Philosophy.

Mark performs as a solo guitarist, as a singer/songwriter, as a freelancer and accompanist, and as a member of several groups. Mark is an original member of the contemporary classical group, Great Noise Ensemble, with whom he has performed at The Kennedy Center, The National Gallery of Art, Strathmore Mansion, The Sidney Harman Hall, The Hirshorn Gallery, Symphony Space, the Catholic University of America, Atlas Performing Arts Center, and the Bang on a Can Marathon.

Mark has taught private music lessons at his home studio since 2004, and he regularly teaches classes and workshops at the House of Musical Traditions lessons studio. He is on faculty at Opal Music Studio in Alexandria, VA, and he currently teaches guitar classes at Burgundy Farm Day School. Mark taught for several years at The British International School of Washington, where he worked with guitar students preparing for their ABRSM exams.

Through his association with The Only Animal, a theater company based in Vancouver, Canada, Mark has composed and produced full-length scores for two of the company’s largest and most ambitious productions of site-specific theater: NiX and Other Freds. Mark’s acclaimed score for Other Freds was nominated for a Jessie Richardson Theatre Award, while the production earned The Only Animal a Jessie Award for Expanding the Scope of Site Specific Performance.

Mark has been on the program committee of the Takoma Park Folk Festival for more than ten years. He coordinates and stage manages the Crossroads Stage.

“Drawing on my broad performance and compositional background in folk and world music, classical, jazz, rock, and musical theater, I offer my students a wide musical perspective and tailor lessons to match student interests. I work with students on music of their choosing to improve technique and develop an understanding of music theory, improvisation, and composition.”