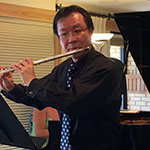 Takeaki completed the entire Suzuki Flute Book studies under the guidance and instructions of the founder of the Suzuki Flute Method, Mr. Toshio Takahashi. He has also completed the Suzuki Method Flute Teacher Training 1A and 1B with the Suzuki Association of the Americas. He received his Music Performance Diplomas in Flute Performance (FTCL and LTCL with Distinction) from the Trinity College London. Takeaki has an M.D. from the Yokohama City University School of Medicine in Yokohama Japan and a PhD in Medicine, from Yokohama City University Graduate School.

Takeaki has been performing on stages around the world since the age of 10 in countries such as the United States, Canada, New Zealand, Japan, and Taiwan. A number of these were Suzuki concert tours and conferences where Takeaki both performed and demonstrated the technique of Suzuki flute.

Takeaki has been invited as a guest lecturer, instructor, and masterclass teacher for institutions such as The International Academy of the Suzuki Method in Matsumoto, Japan, the 35th Annual National Flute Association Convention in Pittsburgh, Pennsylvania, the Annual Conference of Suzuki Teachers in Hamamastu, Japan, and many others. He is a professor of flute at The International Academy of the Suzuki Method, an authorized Suzuki Flute Teacher Trainer by the Talent Education Research Institute, a faculty member for SAGWA Flute Institute, and a faculty member at Westmoreland Suzuki School of Music.

Takeaki began teaching Suzuki Flute Group Classes for Levine in the fall of 2015.

He says that some of his favorite aspects about being at the Levine are “the number of opportunities provided for the students in group lessons, private lessons, and performances. Also the open community created by the faculty and staff.”

Takeaki’s teaching philosophy is to create an environment that is supportive of the individual student’s development. By applying the appropriate neuroscientific and physiological approach combined with the Suzuki pedagogy and philosophy, Miyamae believes that each student will be able to improve.

Takeaki has been a neuroscience researcher since 1991 and a researcher at the University of Pittsburgh since 2004.